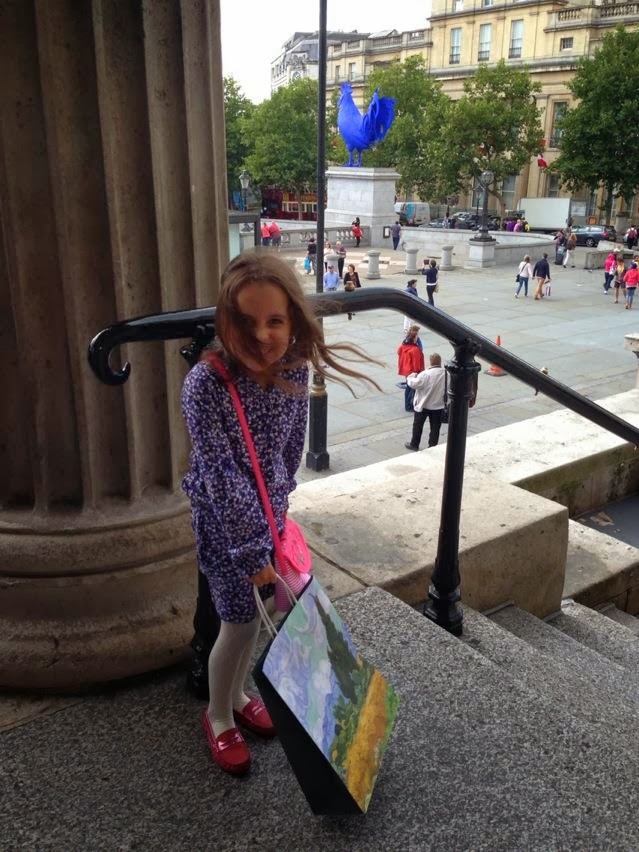 I never thought I was going to have three children (or even one for that matter!). Anyway, after Dixie I thought that was it. I put all my time and effort into her upbringing. From the age of six months I regularly took Dixie to the theatre, exhibitions, art galleries, museums and general happenings around London. That's it, this is the thing! London!

I came from a really small town called San Remo. When I was a young girl my parents worked all the time, so nothing really happened until I was that little bit older and able to go places on my own. If I wanted to go to an exhibition, an art gallery or a concert I would have to travel to Milan, Turin or Genoa which are all a good 3 to 4 hours away by train. Nothing happened in my hometown. The popular "Festival di San Remo", a folk/singing festival, was the most interesting thing that happened and once a year me and my friends made sure we were in the thick of it for the whole week. That meant standing all day in front of the Ariston Theatre in the rain, waiting for singers and bands to come down the red carpet and to see them for half second - or hide behind bushes in front of hotels waiting to see a posh car with blacked out windows drive by. Madness!

Living in London to me is incredible. I feel blessed every single day and I don't care when people complain about the weather, the traffic or the tourists, I still love it and wouldn't change it for anything in the world. People often ask me if I would ever go back to Italy. What for? I say. Why would I deprive my children of London? We have amazing parks, galleries, museums, multicultural neighbourhoods - everything you need to learn is on our doorstep. No, I have no desire to go back to Italy and with it go back in time. I am happy here and in the future, if they ever feel the need to move away, I will be supporting them every step of the way. But for now we stay put.

Things have changed a lot since having 3 kids. I can't go exploring around as much and most days I stay local. However, I still like to take them around town to see the occasional show at the theatre or an exhibition etc. One of the last times I took Dixie out was a few weeks ago when we went to see "Saints Alive", the latest Michael Landy exhibition at the National Gallery. We read about it before going and there were lots of questions like "What are saints?" etc. etc. I must say that, apart from the loud noises, she really enjoyed looking at the "alive" sculptures and was very inquisitive about the whole body of work. In fact she was so immersed in the experience that she never once complained of being bored. So, below is the exhibition in her own words (with maybe a few prompts). From time to time I will post Dixie's reviews of events happening in town as I believe other children might feel stimulated by it and the grown ups motivated to go out and experience our beautiful city, London...

"Me and you went to London to see the Saints Alive exhibition. We were excited. We like art and the exhibition looked very interesting. We saw a lady trying to pull her teeth out. It was very noisy "bang, bang!", I was a bit scared because the noise was very loud.

There was another man that when he did something bad, would bang a stone on his chest. He also was a saint. Saints help and they are very clever. They are special people that help people. There was another saint with a sword that chopped his head because he was mad at himself. But I don't know why. Then we saw the wheel. There was lots written on the wheel. We also watched a video of the artist who made these sculptures. He went around looking in the gallery before making his artwork... but why weren't we allowed to take photos?... Anyway, the sculpture I liked the most was the wheel because it could tell the future and the one I liked the least was the man chopping his head because I don't like people dying."